Many would say the CCTV and Access control were responsible for the constant monitoring of the players and their actions helped the front-man instigate the players crossing mixed reactions between them.
In an enclosed room full of cameras and 456 strangers, there is no doubt that a little tweak here and there would have a considerable effect on them.
With access-controlled doors restricting their escape plans, knowing they can’t get out of the space without authorization from the access control panel, the players have no choice but to play the game without a majority vote. 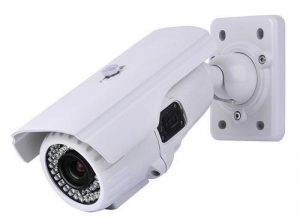 CCTV technology, capability, and utility have all improved over time. The first reported usage of CCTV was in Germany in 1942 when cameras were employed to monitor rocket tests.
Cameras and monitors were among the system’s components. The primary purpose of these early systems was to monitor live events, which is still a popular application today. Cameras can be installed in places where people are unable or unwilling to go, such as near a rocket or in a sewer pipe. Multiple camera systems also allow a single person to watch an area that would be impossible to do otherwise.
The next step in the growth of CCTV technology was video recording. VCRs and multiplexers were employed between the cameras and monitors by the early 1980s. A multiplexer is a device that allows many cameras to be displayed on a single monitor. The multiplexer is responsible for the characteristic split screen of four cameras. Previously, viewing four cameras required four displays or a switcher that only displayed one channel at a time.
The VCR revolutionized CCTV technology. Because the video is being recorded, it may be utilized as evidence in criminal cases. Its capabilities were also enhanced. There was no longer a requirement for someone to keep an eye on the live video. It’s possible that a system will be deployed and then forgotten about.
If an event occurred, there is now a record of it, which may be viewed after the fact. For the most part, the VCR assumed the place of the viewer. The technology remained clumsy. Every day, tapes have to be updated or redone. That meant either the user had a maximum of one day of video or they had to keep a VHS tape library. The recording might be given to the authorities as proof if there was a crime or event.
The CCTV technology industry transitioned to the digital age in the early 2000s. The DVR took the place of the VCR. DVRs simplified the CCTV system. To begin with, a DVR has a built-in multiplexer. This indicates that instead of two pieces, there is only one as it’s directly connected to the cameras.
The footage is also stored digitally on a hard drive, which is the second upgrade. There will be no more tapes; the footage will be recorded internally. When a hard drive reaches capacity, it can begin writing over itself. The machine may store days or months of video depending on the capacity of the hard disk. The video files are also structured in digital format. A time search tool allows the user to look for footage.
Because the footage was in digital format, it could be kept or supplied to authorities by downloading it to a DVD or USB..
In current surveillance systems, the DVRs are equipped with onboard video servers. This enables a viewer to log in from a computer or a smartphone. They can perform everything from seeing live footage to remotely downloading stored video, depending on the DVR.IP megapixel cameras are now at the cutting edge of CCTV technology. The use of an analog camera with a DVR system and an IP (internet protocol) video system are functionally identical.  The biggest difference between the two is the resolution of the video.
Resolution has always been a concern, whether on a VCR tape or digital footage from a DVR. A simple YouTube search of CCTV technology will reveal the current standard of camera quality. IP megapixel cameras record video at a resolution that is 5 times or higher than regular analog video.
This enables for more information in the video for proof, as well as the monitoring of a larger area with a single camera. Axis Communications created the first IP camera in 1996, but it wasn’t until the formation of ONVIF and PSIA that they were standardized.
Aside from the technology, the evolution of CCTV is all about the people who use it. It was only utilized by a few people who could afford it to monitor live footage from the beginning. It was mostly utilized by enterprises to record video as it evolved.
CCTV technology is now being used by a larger range of individuals than ever before, thanks to advancements in the sector and the ease of use of the equipment. The majority of systems are currently supplied to small businesses and homes for live monitoring via mobile devices. People may monitor their cameras from anywhere, which provides them with peace of mind and security.