Where is the best place to put security cameras?

The rear of your home and secluded passages to its side is usually the most likely places that a break-in will occur. In general, the front of your home is much less likely to be targeted by burglars but is likely to be subject to a lot of legitimate activity and could generate a lot of false CCTV alarm activations.

Bonus Tip: How often Should my CCTV be Maintained?

In order to ensure your CCTV Security cameras functions reliably, it is important to ensure it is inspected quarterly. This ensures that surveillance of your premises is ongoing and your assets are protected.

An ongoing program of maintenance inspections sometimes referred to as planned preventative maintenance(PPM),  should be part of your operational tactic to provide optimum performance of your security alarm, access control, or CCTV surveillance systems. We can carry out most routine maintenance and inspections whilst the equipment is still fully operational and therefore surveillance continues uninterrupted.

What height should a CCTV camera be installed?

While there is no one-size-fits-all solution, we recommend placing the camera between 2.4m and 2.6m in height (about 8ft). This, of course, is dependent on the type of property as well as any render, tiles, or other décor that may be visible on the structure. Not to mention the sort of camera that is being utilized, as well as the lens size.

How many megapixels is good for a CCTV camera?

These phrases can refer to the size of an image acquired by a camera, sent over a wire, shown on a screen, or saved on a hard disk.
When comparing megapixel camera specs, pixel counts may differ somewhat from those listed above. This is because some cameras provide the ‘effective’ pixels while others specify the total number of pixels collected by the sensor. Some of the total pixels are utilized to store technical housekeeping data that does not contribute to the image’s ‘effective’ features.
The resolution of an analog camera is often reported as “TV lines” by those familiar with CCTV.
While there is no one-size-fits-all solution, we propose that the camera be installed between 2.4m and 2.6m in height (about 8ft). Obviously, this is dependent on the type of property as well as any render, tiles, or other décor that may be visible on the structure. Not to mention the camera’s make and model, as well as the lens’s diameter.A different resolution may be required for each camera in your application. It all boils down to how much information you want, what platform you currently have in place (if any), and how much money you have to spend. Recording monetary transactions, requiring facial identification, or reading license plates are examples of applications where investing more for greater resolution is easily justified.It’s crucial to think about what platform your camera will run on because this might limit your resolution possibilities. To summarize, CCTV platforms are as follows: Analog cameras use coax to transmit and can collect up to 700 lines of data (approximately full D1). HD-SDI cameras collect higher-resolution pictures, which are then encoded and decoded before being sent over coax. CAT5 is used to transport data from IP or network cameras (just like computers). It is possible to connect analog cameras to a CAT5 network or to connect IP megapixel cameras to coax, but this would necessitate additional gear and complexity, thus it is not advised.
We don’t propose HD-SDI cameras very often because the existing technology has flaws (a topic for another discussion). Megapixel cameras with high resolution are wonderful and are getting more inexpensive.  Keep in mind that the higher the camera quality, the more bandwidth and hard disk space you’ll need to send and store the data. In most circumstances, cameras with more than 2MP are not worth the extra cost (at today’s rates), especially when factoring the additional bandwidth and hard drive storage requirements.
It’s helpful to realize that horizontal resolution is more sensitive to the human eye than vertical resolution. So, for example, there isn’t much of a difference between 2CIF and 4CIF to the naked sight. Another aspect of the human eye to be aware of is frame rate. The human eye can process around 15 visual pictures per second (frame rate). Smooth motion is defined as any frame rate greater than 15 frames per second (fps). The maximum frame rate possible per device in CCTV is generally 30 frames per second (fps), which is called “real-time.” However, anything above 15 frames per second will look great. Different resolutions and frame rates will be listed on some devices.
For example, an IP camera’s resolution may be specified as “3MP at 20fps” or “2MP at 30fps.” In this scenario, we recommend utilizing the “3MP at 20fps” preset.
In a CCTV application, many cameras with different resolutions will be utilized, but there will usually only be one recording device. As a result, double-check that the recording equipment you choose has at least the same resolution as your highest-resolution camera. Also, depending on your demands, make sure it has enough hard drive capacity to record all of your cameras for a reasonable period of time. Image resolution is crucial when something happens and you need to replay the clip. If you need to zoom in on a movie, the sharpness of a zoomed-in image is determined by the recorded resolution. As a consequence, configure each DVR channel to record at the highest resolution supported by the camera.

Which is better IP camera or Analog CCTV?

Video Clarity and quality: In general, IP cameras deliver better video quality than analog cameras. They have a wider choice of video site options, such as a broad or restricted field of vision, as well as improved zoom-in capabilities. They also provide significantly more visual information since they send true digital signals, making them far better for facial recognition and recognizing license plates digits.
Analog cameras have poorer overall quality than IP cameras, although they operate better in low light. Analog cameras have a smaller range of coverage and lack the zoom-in clarity of IP cameras. When you zoom closer on the analog pictures, the image becomes grainier and deteriorated. It’s not like the cop programs you see on TV. If you zoom in on an analog camera, you won’t be able to recognize the criminals’ faces.
Resolution: Digital cameras often have resolutions that are 6 to 20 times greater than analog cameras.
Analog cameras are limited to NTSC/PAL resolutions of 720 x 480 pixels (NTSC)/575 pixels (PAL) or 0.4 megapixels (4CIF). Analog camera resolutions range from 420 to 700, which may create fine images at the high end.
IP cameras can transmit compressed, encoded images with resolutions ranging from 1.3 megapixels to 5 megapixels (2560 x 1920). This allows you to cover a much larger viewing area or acquire far more detailed photographs in small, zoomed-in viewing regions. 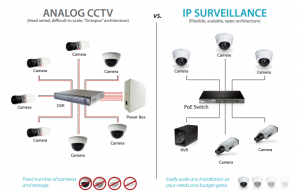 Transmission media: Coax cable is used by traditional analog cameras. They may also be used with twisted-pair cable or wireless connections, although the resolution is reduced.
IP cameras may also be used with twisted-pair, coax, and wireless connectivity.
Power over Ethernet (PoE) : One of the benefits of IP cameras is that they may be powered by a twisted-pair Ethernet cable, removing the need for running an electrical line.
PoE cannot be used to power older analog cameras.
Wireless: In regions where running cable is difficult or expensive, wireless IP camera network connections might be a highly practical alternative. Wireless can also be utilized in locations where running cable is problematic or impossible, such as historical structures.
Distance : Analogue cameras can deliver video up to 1.5 kilometers over twisted-pair cable and up to 300 meters via coax cable. However, as distance increases and the signal is transformed from one format to another, analog transmissions lose clarity.
IP cameras can transmit digital video over twisted-pair Ethernet cable up to 100 meters and across IP networks up to an indefinite distance. Because the visuals are digital, they retain their full sharpness over long distances and when the signal is translated between formats.
Security: Because feeds may be physically intercepted, tapes and recording equipment taken, analog cameras are significantly more prone to security breaches. Analog video streams aren’t secured either.
Data is tough to intercept with IP cameras. They encrypt and compress data before sending it over the Internet to your server, and they also enable VPN connections.
Costs: IP camera systems are perceived to be more expensive since IP cameras are more expensive than analog cameras, despite the fact that IP camera prices are continuing to fall. However, because of decreased expenses for cabling, recording equipment, and personnel, the entire cost may be cheaper than expected.
Installing IP cameras with existing cable infrastructure through the use of extenders and media converters can also save money.
Ease of Installation
When compared to IP cameras, analog cameras require more wiring. They need a separate connection to control the pan, tilt, and zoom features, for example. Another wire is necessary if there is audio. Three distinct cords may be required for a single analog camera: power, audio, and video.
Over a single connection, IP cameras may receive power, video, audio, PTZ control, and control signals.